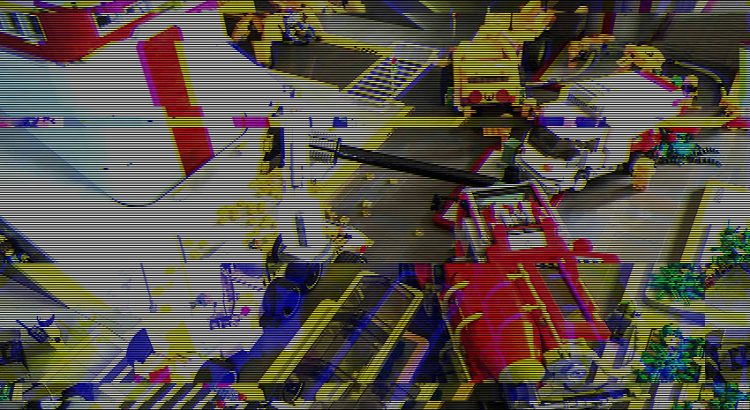 Somewhen in the not so distant future in the heart of Romania, something is going on at a bus stop in an industrial complex.

(more after the jump)

Mastermind Keith did it again!

He created a massive display and gathered some really talented people who contributed exclusive models for the display. It happened that I was involved…

It was a long term project with prior attempts finally rolling out into the actual presented project. Keith and I had an intense exchange about the vision and progress which was a great experience.

Creation process of the Hazmat rig

(If this does not interest you, you can just skip the text and jump down to the gallery)

After seeing some WIP shots of the diorama with some Hazmat guys populating the scene I instantly knew what I would have to build. This and the long term urge to use the fresh bright light orange coloured parts inspired me to do the hazmat rig.

First of all I considered some reasonable functions and the design approach. Steering was important to me, so the truck would be able to steer in narrow and tricky places, like in underground areas or half destroyed industrial complexes. This led me to integrate a large rotation point instead of steerable wheels, which would allow to create narrow mudguards as no space is needed for articulated wheels. Another advantage of the axial rotation point is the maneuverability. Followed by the development of the chassis. The design basically adapted the window section of the massive buildings of the diorama. Thus to tie the scene and the vehicle design together. Here there was also a first attempt/fail, the actual outcome is the second version with parts from the first version. One major issue I had to work around was that I wanted to add a real door / hatch for the cabin, which seemed impossible at the beginning due to the complex design. Then I came up with the idea that the whole front opens up and part of the floor levers down.

In the beginning there was a huge scale two-legged mech alongside another version of the small robot (which was much too skinny). The basic idea was to place a mech at the rear of the truck, like the fire men on the fire engines.

The mech is the muscle upfront. It enters the scene and secures the area. That’s why it carries a pack of deployable hydraulic supports, so it can stabilize broken ceilings. The height of the extended supports is a little bit above the height of the truck, so after the ceiling is stabilized the truck can move in.

The truck also features a deployable compressor with tubings for pumping liquid from or into the tanks. Furthermore a small scout drone equipped with all kind of sensors constantly buzzes around and monitors the whole scene.

stand-alone shot of the truck on scene

the truck in action